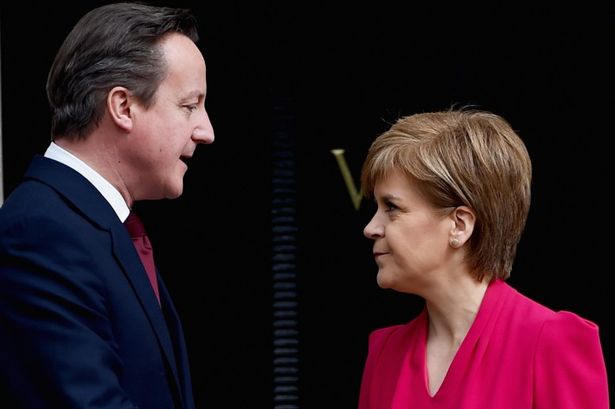 Last Fridays meeting between David Cameron and Nicola Sturgeon will surely prove to be yet another monumental milestone in the future of the Union.

Attempting to take the whole mile after they had been given Cameron’s proverbial inch may well have been Ms Sturgeons modus operandi all along, but the Prime Minister would do well to bear in mind that the momentum is all with the SNP at this moment in time, and especially so when it was the manipulated public awareness of that very fact that arguably put the Conservative Leader more comfortably back in No. 10.

The words of hollow statesmanship may be contrived to sound like the PM is being tough. But the word ‘no’ can all too quickly be overused and the only way that the Union may now be truly saved, will be for the Government to begin saying yes to the questions that the grassroots Scots have not even outwardly asked.

Devolving power only as far as the Scottish Parliament will do much to enhance and progress the march of the SNP towards the Independence which many of us no longer see as being any more than perhaps a few years away if things continue politically as they are. Scotland’s leaders will surely get closer and closer to attaining the level of power that they so badly crave but could never realise as long as they continue to be part of the UK.

But the people, the voters, the electors who have facilitated this Westminster-bound charge will see no real change in the lives that they live. Indeed, they may well find themselves much more poorly off and continuing to be just as disenfranchised, all because another set of politicians have sold them short as currency for their own personal and self-motivated gain.

The sweet irony of all this is that everyday people across the UK feel just the same and just as disenfranchised as the Scots, but do not experience the same kind of tribal feeling of belonging or commonality between people which has been supercharged in this instance by the promotion of Scotland’s national identity.

Nationalism in this sense truly has become far more of a danger to any semblance of a healthy basic standard of living or status quo than even austerity in time could prove to be, and the reality is that the Scottish Question could be solved in exactly the same act as any questions that have arisen about English, Welsh or even Cornish devolution.

So why exactly, are the politicians not pursuing what is arguably the most simple, straightforward and easy to implement solution. One which would connect people with decision making on their doorstep, whilst removing any need for side-stepping ruses like City Mayors. A change that could bring talk of independence to the immediate halt that anyone living in the real world knows is where it should actually be?

When you consider that this solution already exists right across the Country and would have the ability to administer the devolution of decisions that should be made locally, rather than by a Parliament that seems to many so very far away, any sensible person would be hard pressed not to ask the question.

So then; consider that below the tier of Westminster based government, there is not one; not two, but three tiers of localised government operating, with representatives in most cases already elected by the people, who could and no doubt happily would assume much more responsibility for the decisions which really matter to the localities in which they live, if the Government were to relinquish the appropriate powers and let them do so.

Parish and Town Councils are the most localised and arguably most accessible form of Government in the UK. Yet their responsibilities seldom extend beyond buying and locating dog bins or bus shelters and looking after community assets like small play areas, recreation fields and perhaps an historic Town Hall.

Next comes the District level authorities which harvest our council tax and assume responsibility for matters such as Planning, Licensing, Environmental Health and collecting our waste.

Then there are the County level authorities which look after the not-so-important roads, Education, Social Services and interact closely with services such as the Fire Brigades.

They all sound very administrative or bureaucratic and that’s because they are. People vote to elect the members or councillors that represent them on all of these authorities. But much of the responsibility many people understand them to have isn’t theirs at all. It actually reflects Laws and Policies which have been created by Westminster.

The wriggle room or space for decision making which is truly independent of the Westminster influence is scarce within local government. In reality, it is just sufficient enough that central Government can blame Councils or use them as a convenient scapegoat for political expediency. For instance, Westminster happily passes the buck over the true causes of cuts to local services whilst reducing the size of the bottom line they themselves have to account for in the drive for greater fiscal austerity.

The irony should not be lost on any of us that like most areas of government, local councils are being forced to change the way they work to save money, but the powers to instigate the changes that they really need are held back by a distant political elite which is obsessed with monetary cost rather than the real-life impact from a lack of meaningful reform.

As power is increasingly centralised towards London through the sharing of services and amalgamation of local authorities, power is being taken further away from people at every turn and it is this very act which is continually fanning the flames of discontent within an electorate that quietly knows its influence over even the most practical parts of their lives is becoming ever more remote.

The reality however, for those who have worked closely alongside all the lower tiers of government, is that when those rare moments arise when people sense there is a real chance to influence change, the presence of that opportunity can literally electrify interest in local administration and reconnect the electorate in a way that even the phoney wars which serve as our elections cannot do.

For those who have experienced this connection first hand, there can be little doubt that bringing real power back to street, neighbourhood, village and suburban level would quickly re-engage the electorate and have the potential to bring in a whole new generation of politicians from the grassroots level who didn’t simply join a political party one day because they thought they would be a pretty good prime minister.

The question is of course, why is Westminster not using the existing machinery of government to solve the bubbling crisis created by the SNP leaders and the mishandling of the issue of devolved power, when every thread of common sense and voter-centric thinking says that is exactly what they should do.

Indeed, we might also ask why the promise of City Mayors and the creation of yet more tiers of government and the political stooges that will inhabit these roles is necessary, when many councillors are already in place across the UK, who have distinct connections to our localities that focussing power on just one person at a greater distance could never achieve?

For those who have swam around the political goldfish bowl with their eyes open the answer is regrettably simple.

Its all about control, and despite the political system being infested with the self-serving at every turn, you could quite easily say that there are no greater control freaks at work right now than the occupant of no. 10 and the leader of the SNP.

Both stand to gain personally by concentrating as much power as they can within the realms and reach of their particular roles.

To one, devolving real power to potentially thousands of others who they cannot control politically makes absolutely no sense at all. To the other, giving credence to the idea that power should be focused as near to people as it is possible to do so would instantly destroy the dream of becoming the player on the international stage that British politics is otherwise currently only able to allow of the leader of one of the two main Political Parties.

Some would quickly argue that the lower tiers of government are not equipped to deal with real decisions; but that is exactly what they have been elected to do.

Others would say that responsibility needs to be taken by the people who are most capable of using it with the hint of blind acceptance that MP’s should automatically be assumed to be ‘the right people’ to govern our lives. But we might rather ask, who is better qualified to choose those representatives than the people themselves, when Westminster is now constructed of people who did no more than tick all the right boxes for their political parties and thereafter, did not do a great deal more than sign a series of forms. Can we really say that career politicians with no experience of the world outside are really the people we should entrust with the decisions that affect us all in every way?

The danger of Cameron playing power games with another political leader who is arguably far more awake and attuned to the realities of playing the public song than he could ever do so, is potentially very severe indeed.

Empowering existing councils and creating new ones where they don’t exist could potentially remove the need for the Scottish Parliament and Welsh Assembly in one swift stroke. It would undoubtedly answer the question of voter disenfranchisement across England too. But it would also require true statesmanship of a kind that many of us have simply never seen.

The very regrettable and destructive alternative is the continuing empowerment of a different kind. That of Scottish, then Welsh and then potentially even English Regional or County Independence with a widow’s web of bureaucracy and additional cost that simply doesn’t bear thinking about. A concept which may play very well into the federalist plans of a politically united Europe, but would ultimately leave the real power for issues that matter to real people in their everyday lives, lying in the hands of a majority of non-elected bureaucrats and foreign politicians who were neither born here, nor have nor ever will live anywhere within our great and currently unified land.

Top image thanks to http://www.dailyrecord.co.uk