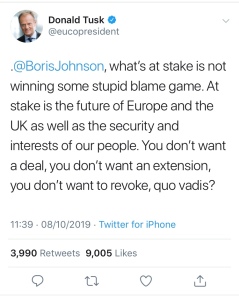 No matter how much the Remainers in Parliament protest and suggest that Angela Merkel was merely responding to Boris Johnson in kind, the fact is that the EU has now firmly tied its colours to the mast.

Whilst the Parliamentary dynamic means that Boris could again be stopped from delivering a no deal Brexit with dubious technicalities alone, it has become very clear that the Remain-collective-opposition in Parliament will be doing nobody any favours if they continue squatting in their Seats whilst protesting that there is some kind of deal with the EU to be had. That ship has already sailed.

Whether the approach and obfuscation they have adopted in pursing a deal that would never exist has been based on ignorance, arrogance, sycophancy towards the EU or all, these MPs are responsible for over three years of wasted parliamentary time.

Issues that are affecting real people in the world outside of Westminster could and should have been discussed, addressed – and yes, on that Government timeline actually solved and presented as solutions to us all too.

There are probably a great many of us who would like Boris to now pull some kind of Benn-Act-disabling white rabbit out of the hat. But next to making the argument that now that the EU has made its position clear, the terms upon which we would Leave the EU now on 31st of October are still to all intents and purposes an agreement – and therefore a deal that qualifies his actions against the questionable ruling of the Supreme Court – the wisest amongst us would probably be sensible to assume that Boris has been playing a game of high-stakes poker with both the Remainers and the EU, because it is difficult to see that he has anything that could remotely resemble an ace or two buried away somewhere up his sleeve.

It doesn’t matter now that the cat is out of the bag. With the reality that there never was a sensible compromise with the EU waiting to be had, the focus of any MP who has an ounce of respect left for the People who elected them to Office will move to facilitating the General Election that the British People have been waiting for, rather than continuing to do everything possible to frustrate our will.

But whilst all of our MPs and the Political Parties they represent will be falling over themselves to go back to being tribal and make ‘Vote Conservative, Labour, Lib Dem’ or whatever Party the cause, they would be wise to step back and remember that Brexit was a symptom of the things they and politicians before them have been doing in office and was not in any way the cause.