In the pages that follow, I will cover the real problems that have led to the Johnsonian Tories pursuing their ‘Levelling Up’ agenda, whilst over recent decades, the influence of the Left has been the pernicious approach and impact of ‘Levelling Down’.

I will discuss why the nebulous policies of both Left and Right end up making the problems that society faces worse for everyone – if they actually help in any way at all, and why the problems that nothing more than political tinkering around the edges creates only serves to obfuscate and hide the real causes of the problems that we all now face.

With the changes to the world and the way that we live now coming, later in the book I will then move on to talk about the issues that the next generation of politicians will face.

I will offer some solutions and ways to begin addressing the imbalances that exists across society, and the early steps that must be taken if we are all to experience a future that is fruitful for all, is sustainable, healthy and above all actually works.

Politics has become the end, rather than being the means to the end.

The UK is the person with major health problems. It’s in a beauty salon, where every wannabe politician must be seen as top dog by everyone. But this political class are just the Saturday morning trainees, only able to sweep up and comb hair*. They smile sweetly and tell the Country that having a great look is all it takes to fix the problems experienced by all. Meanwhile, what the UK really needs is every form of medical surgery known, with the mental health care and physical rehabilitation necessary to make every part of our system work together, returning the UK to full fitness and providing fair and balanced lives for everyone in the shortest time possible.

For as long as this broken political culture and way of thinking in UK governance is allowed to continue, no soundbite or promise that it contains to us all, will ever end up delivering in any way as we believe it was intended, or indeed in any of the ways it really should.

*The qualified hairdressers are the government officers and civil servants, or people who like to ‘nudge’

None of the politicians that we have today either understand or want to understand how the real problems that create an unjust and imbalanced society can or will be fixed.

The greatest travesty is that those we have elected to deal with such problems on our behalf are failing to do so.

Our politicians cannot deal with the problems that we face, because they are incapable of fulfilling the roles and responsibilities that they have been given, or self-interest leaves them wilfully blind to actually doing so. 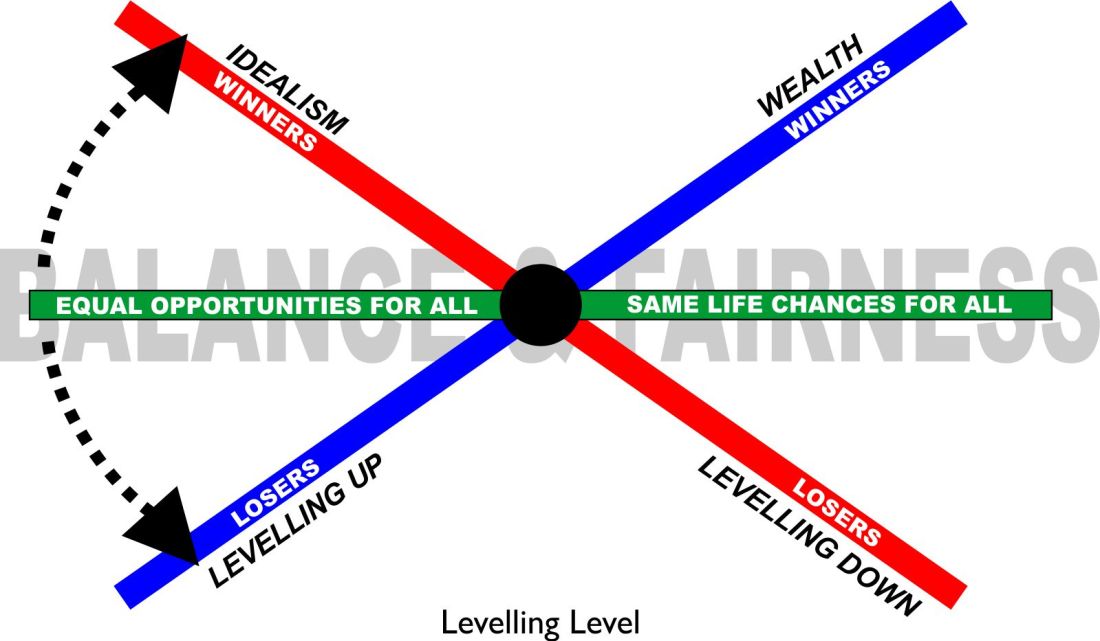 The so-called success of our politicians revolves around the use of soundbites.

It’s been a problem since the time of the Blairist New Labour Government of 1997-2010. There was an identifiable shift from politics being about the end result (when at least some of our politicians had the wherewithal to get things done themselves), to becoming all about the message itself.

So bewildered was the Conservative Party by the (New) Labour landslide victory of 1997, they decided the only way to beat them was to play them at their own game.

As power has shifted back from the Blairist years (1997-2010) of the left-wing wolf dressed in right wing clothing, to the Johnsonian Conservative Party of the right that today is even more left than the left, a new low in the meaninglessness of what our political classes do [to us] to retain their power in this Country has finally been reached.

As I write in early 2022, one such soundbite in daily use is that of ‘Levelling Up’.

Suspicions that Boris Johnson and the current crop of Parliamentary Tories are pushing the Levelling Up agenda just as one way to survive, the element of truth that makes the term feel valuable to anyone with ears to listen, is that our political classes do at least appear to know that there is a problem.

All the while, the Labour Left pursue an agenda and way of thinking that through the changes and implementation of public policy achieve nothing but levelling down.

Levelling Up or levelling down; it doesn’t matter. Unless there is balance and fairness in the form of a level playing field at the point where we all step off, there will always be too many of us who lose out, whilst the same old few will end up with a win.

Regrettably, the truth that sits beyond that knowledge, is that none of the MPs sitting on the green benches in our Parliament know or understand the breadth and depth of the problem, or how the problem actually works.

That is why they are playing around with a soundbite that suggests the problem can easily be fixed.

Freedom of anonymity is not freedom of speech, yet it serves all the wrong purposes for it to be seen as the same thing

If you don’t want LTNs, ULEZs and 15 Minute Cities, STOP voting for the same politicians and the same parties that will keep on putting them everywhere!

Is conformist diversity and everything related to political correctness borne of the death throes of a patriarchy desperate to maintain power through control?