It’s very sad to read the same messages, the same comments and the same rhetoric pumping out across social media following the latest Government measures in response to the newest Covid ‘Omicron’ variant. Few will disagree that they look very much like the first step down the slippery slope to the next Lockdown that we are all dreading.

It’s sad, because the voices are the same. The words come from people with public platforms that give them more influence than even they might recognise. But those same people are continuing to reason that giving a voice to our frustration, anger and incredulity at the Government and Establishment narrative will be enough to instigate change.

Regrettably it will not. Neither will be threatening marches, civil unrest or even seeing these steps through to the point where even the final flakes of democratic paint fall from the façade of a political culture which now has tyranny embedded at its heart.

It was not until the Summer of 2020 that many of these voices began to really emerge. We cannot be sure if it is because they were giving the Government the benefit of the doubt or just believed everything that they were being told up until that point.

Yet the realities underpinning the massive mistakes that the Government were making then established the narrative that led to where we are right now. They have always been there for everyone who looks closely enough to see.

Keir Starmer had already reshuffled his front bench, making the seemingly unelectable Labour Party electable to at least some of the media commentators again. Now, with the lie that covered the ‘them and us’ mentality of this whole political culture fractured and oozing daylight for all to see, there is a real risk that people will elect the only alternative that we have when the next General Election comes. An election that could be only months away where the alternative could be even worse than what we already have and is as such no alternative for us at all.

The point should not be lost on any of us, that when the next General Election is called, the only options that the majority of people will put a cross against on their ballot paper will be for a Conservative, Labour or Liberal Democrat candidate. As such, the people of this Country can only vote for more of the same. Today there is no such thing as a genuine democratic choice for the next government of the UK.

It is increasingly difficult to criticise those who are buying into the suggestion that there is a conspiracy at work behind everything that is happening at any level. With much of what we are now experiencing defying explanation and the absence or void of leadership that communicates both authentically AND genuinely in a very transparent and uncalculated way, people are looking to make sense it. And without those in authority fulfilling the responsibilities that they have in the ways that they should, those same people are going to keep listening to what anyone they believe to be credible has to say whilst growing in number too.

Unfortunately, what the conspiracies and big words don’t allow for are the reasons that everything that is happening as it is. They don’t discuss what has really happened and why. There is no reasoned suggestion of what will happen next in so many respects, and why it will be so.

It all boils down to being about the people who are in charge. The people who run this Country. Why those people are there. How they got there. What is happening that prevents good leaders and public representatives from taking these roles and why they are not there for us to vote for at election time, speaking and connecting with us all in a way that makes sense.

No matter what anyone thinks or believes today, the problems we already face and that we will face in the near- and longer-term future will not be solved by someone else appearing from out of nowhere. Just as they won’t be solved by any of the would-be political groups that are busy telling everyone that they are the next best thing. They are at best built around single-issues or are just a load more wannabes who look at the Boris Johnsons of the World and have concluded they would be better at doing exactly the same things.

WE MUST BE THE CHANGE – IF CHANGE IS WHAT WE ACTUALLY WANT.

It will be counterintuitive to many to suggest that the politicians who can provide the solution to the problems we face today are not even elected or sat in our Parliament yet. We must literally create the political party and movement that will get them there. This is the only way.

The talking up of dissent is just that. Its talk. Nothing more. Talk that may lead to protests, arrests, prison sentences and potentially even deaths. But it is talk that will not lead to real change.

This Government, this political class and the establishment around them currently see no threat to themselves, their narrative or what they are doing.

Until they see a threat to everything they take for granted, they will continue to behave and make decisions that work only for themselves in just the same way they are now and have been doing so for far too long.

The real, far-reaching and meaningful change that we need will only be achieved by changing the Government for one that is completely new and untainted by the cesspit of selfishness that British Politics has become.

We must prepare and do everything that it will take to achieve this at a General Election. But as soon as we begin that work together and a credible alternative begins to emerge across the Country, the behaviour of those in control of our lives today will at the very least begin to be moderated.

The political system only tolerates those it doesn’t see as a threat. Those who believe they are on course to being the next big thing would do well to consider this when they think about how and why people vote, and where the real power across the UK lies.

All it takes is to begin a conversation to which everyone who is invested in change is invited. A dialogue that is respectful and inclusive of the thoughts and experiences of us all, wherever in the Country we may be.

We must begin work to create, build and connect each other to A NEW PARTY FOR ALL. That work needs to begin right now. 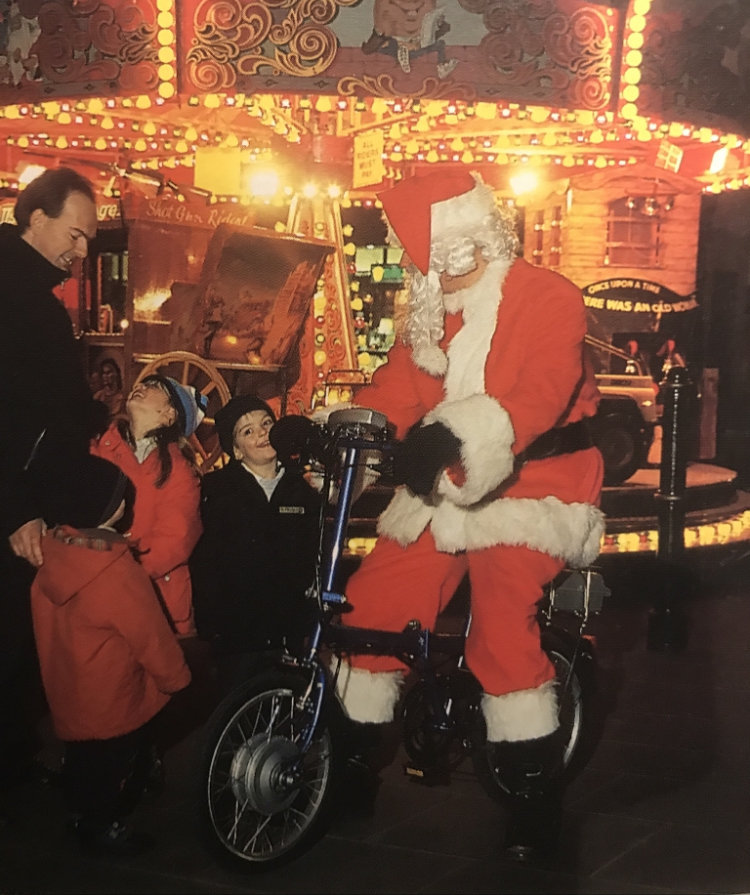 20 Years ago, I was in the final months of running and developing the JumpStart Project for the Gloucestershire Rural Community Council before I moved over to Shire Hall at the beginning of the following February.

I’d been with GRCC for a couple of years and really enjoyed developing new services for a Charity project operating around the rural Districts of Gloucestershire that helped unemployed people who were trying to access jobs or training and couldn’t get there because they didn’t have any transport.

We were already lending out mopeds and bicycles, as well as buying people their first weekly bus ticket or just opening another door to someone else who might be able to help them.

I was looking for creative ways to provide more options for the people we were helping, that would also encourage the local Councils and our existing partners to keep supporting us by experiencing even better results.

One day, I saw an editorial for what may have been the first or certainly one of the very first companies to start importing battery powered bikes into the UK at the time. You may not believe it, but sustainability was already a big thing outside of the mainstream and I quickly concluded that these bikes were just the thing that we needed and really would provide a win-win.

The funders I approached agreed with me too. In fact, our main partner on this new offering was the local Rural Transport Partnership who had recently taken on a PR guy called Stuart Bexon, who I still suspect had got lost on his way somewhere else and thought he’d just have six months out whilst he was here and see if he could humour the public sector in some way.

When I met Stuart for the first time to talk about the funding we’d just won, we hit it off in comical style and it felt like a meeting of caper-driven minds and a bit of a coming home.

Very keen to make the best of the opportunity for publicity that we realised we had; we bantered our way through one of the funniest brainstorms you could imagine.

Armed with the sense that we had been tasked to promote the concept of integrated transport in its most literal form, we soon concluded that the best way to do so would be to take a fold-up battery powered bike around the whole of Gloucestershire’s Public Transport network – with yours truly dressed as Santa Clause.

Over three days in mid-December 2001 using the borrowed Toyota Prius ‘support car’ that Stuart had blagged from Bill Allen Toyota – the Cheltenham Toyota Dealer at the time, we set about delivering on our ridiculous – but very successful plan.

The local media absolutely loved it. Wherever we ended up or passed through, a reporter or journalist wasn’t very far away and the picture here that I borrowed from the Countryside Agency Publication ‘Two Wheels Work’ was taken on Cheltenham Promenade shortly after we ended what I believe was the final day at the front door of John Dower House – which was the base of the CA at the time.

I think my only (possible) regret was the look of bewilderment on the face of a very young child when they got on to the bus to Cirencester at the next stop after we started in Tetbury and sat opposite Santa for the whole journey. It was quite clear they were wondering where the hell the Reindeer and Sleigh had gone and why Santa had turned up early riding on the same bus with his giant arm draped over a fold-up bike!!!

Freedom of anonymity is not freedom of speech, yet it serves all the wrong purposes for it to be seen as the same thing

If you don’t want LTNs, ULEZs and 15 Minute Cities, STOP voting for the same politicians and the same parties that will keep on putting them everywhere!

Is conformist diversity and everything related to political correctness borne of the death throes of a patriarchy desperate to maintain power through control?